“… the CD is a real pleasure to listen to and Alex McCartney shows he is a very good lutenist which one has a desire to hear more from.”
Jean-Luc Bresson, SFL (Translated from the French)

“Using three suites Alex McCartney gives us a good impression of the refined art of the master.”
Pizzicato (Translated from the German)

“I have the CD and I LOVE it! I have to keep reminding myself that Mesangeau was a near-contemporary of Dowland. Alex’s interpretations are spot on.”
Bill Samson

A deserved recipient of European fame and success, René Mésangeau (fl. 1567-1638) was popular amongst contemporaries, receiving recognition by both Pierre Ballard in 1631 and 1638 and Marin Mersenne in 1636 (Harmonie Universelle). Robert Ballard also regarded Mésangeau very highly, placing him in the ‘First Rank’ of lute composers. Mésangeau’s innovative experimentation with lute tuning systems eventually led to the development of the ‘standard Baroque lute tuning’, centered around a d-minor chord.

Mésangeau was born in Paris in the last quarter of the sixteenth century. During his time in Germany (presumably pre-1617) it is likely he met Besard, who included a courante by Mésangeau in his Novus Partus published in 1617. Returning to Paris he gained a position in the service of Louis XIII with the title écuyer sui ordinarement la cour. His deliberately new style must have made a striking impression. By 1621 he had been elevated to the position of musicien ordinaire du Roi. At some point during this period of success Mésangeau married Marguerite Jacquet, the daughter of the famous spinet maker Jean Jacquet.

Mésangeau’s popularity was summarised at his death by his pupil Ennemond Gaultier who composed the first known tombeau in his honour (Le tombeau de Mézangeau, 1638). 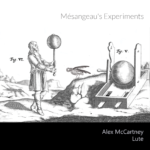